You can find God anywhere, even in a Waffle House.

Bobbye, like a lot of us, was a good person, but maybe just a little sidetracked. He was enjoying a bunch of worldly things, and hadn’t fully given his life to Christ. Listen to his story as he talks about how people in his life, including his college sweetheart, helped bring him closer to God.

He’s now a minister himself, helping other young folks experience the same joy and peace of knowing that God is always there, ready to help you get back on the right track. 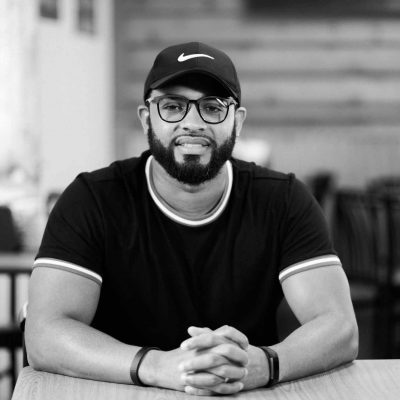 I grew up in the church, my parents, you know, I mean, they grew up in the church, so I would say I was spiritual, if that makes sense. But I allowed certain things to go on. I did certain things in my life, whether it was sex or drugs, stuff like that. Clubs, strip clubs, and was totally comfortable in those environments, and my friends, you know, being with them. I just was like, Hey, I’m a Christian. I believe in God. And you know, I was just having a little fun. I was no stranger of Jesus, but just hadn’t committed to Jesus. You know what I’m saying? And I heard somebody say that, you know, acknowledging Christ doesn’t make you a Christian making Him Lord over your life does.

I actually got saved in 2007 and it was in a Waffle House, actually, in Maryland. I know it’s kind of weird, but the pastor, he said, “Hey”—it was me and another gentleman that we were coming back from school that year, that summer—And so he said, “I want to meet with you guys. Let’s go to Waffle House, get some breakfast. And let’s just kind of talk about your walk with Christ.” He got there and he just kind of laid it on thick if I’m honest. He was just like, “Man, you know, your living this life and although you’re living a good life, good people go to hell. You know, you need to be living a saved life. For me, like in knowing in Christ that, hey, no matter what I have going on, He’s always there with me. You know, I can’t tell you how He’s working for you or what He’s done for you, but I can only say what He’s done for me.

Jesus died on the cross for my sins, just to, to allow me the opportunity to see God’s face. That is the greatest gift. That’s the greatest that could ever be given. So for me, I see Him a lot and this is not cheesy, I see Him a lot in my wife. We met in college and I would call her sometimes and “Hey, what are you doing?” And you know, it’s 8:30am, I’m getting ready to go to cafeteria for breakfast, something like that. And she’s like, I’m reading my daily devotional. I’m like, man, you’re reading your daily devotional, like, okay. And so then after a while after hearing that so many times, I’m like, why don’t you give me one of those daily devotionals, let me see what it’s talking about.

I credit her for a big portion of my walk, getting close. I realized even as a saved individual, as a minister, I still fall short every single day. But the difference is understanding that I have somebody I can go to and they’re not judging me because of that. They’re saying, Hey, I saw you fall, come on, let’s get back up and let’s get back on the right track. And I’ve never met anybody that said, man, when I gave my life to Christ, that’s when everything started going downhill. I’ve never known anybody to say that. I’m Bobbye Matthews and He Changed My Life.